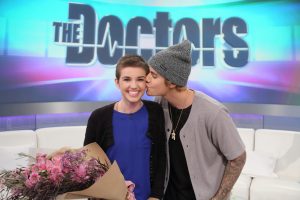 In January 2015, I got the opportunity to go on The Doctors TV show in Los Angeles. It was an amazing opportunity to share my story and form a message that would inspire others watching, and while I was there, another great experience came out of it: I ended up meeting Justin Bieber!

I was super nervous because this was one of the first things I had ever done on TV, so it was a big deal for me. I went out on stage and talked about my story for a couple of minutes with the doctors on the show. Out of nowhere, Dr. Travis looked at me and said they had a surprise. It was a video from Justin Bieber saying he thought I was inspiring. I was so shocked. I didn’t know what to say or do. I just kept thinking, “Did that just happen?” My mind was completely somewhere else, so when they were asking me questions, I was just nodding.

Then, while I was facing the crowd, I started hearing them gasp and cheer. I was so confused! That’s when I saw a purple bouquet of flowers appear in front of my face. I felt a hug from behind, and it was Justin Bieber himself. I was hugging Justin Bieber! If you’ve watched the episode, you know that my face says it all. By the time all of this was happening, I was so confused, excited, and everything in between. 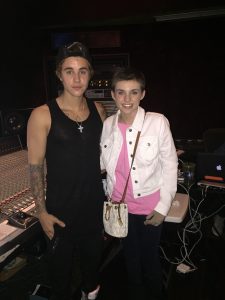 My family and I ended up hanging out backstage with Justin for a little while, then eventually meeting back up with him later. He was very nice to each of us that day and was able to lift my spirits for a little bit. That whole experience is something I look back on and still can’t believe it happened.

Not only was this a meaningful experience because I am a big fan, it was a great experience because it helped me want to do better. When I went to L.A., I was in a bad spot in my recovery process. I wasn’t feeling good about my hair or the clothes I had to wear, and I still had some open wounds. I had just gone back to school and was trying to get back into the swing of things again. This experience helped me do just that.

I didn’t realize it at the time, but looking back on it, I can see that this experience helped me become who I am today. I was motivated to work on myself and my healing process. It paid off in the end, and I credit some of this to being on The Doctors and meeting Justin Bieber.

I was invited back to The Doctors for a follow-up episode that aired in February 2018. Watch it here!

Posted in Uncategorized and tagged Justin Bieber, The Doctors